Rugare girl Rapist, Murderer killed by the mob after a failed Robbery Attempt 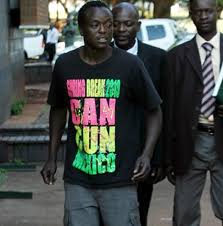 Karma seems to have hit Tawanda Motion Mugove, a man who was accused of raping and killing a 10 year old girl, Stacey Munjoma in 2013, as he was brutally attacked and killed by a mob when he was caught while attempting to rob a house in Rugare yesterday.

Sources who spoke to the reporter said Mugove was in the company of 2 companions who managed to flee the scene when he was caught.

“The incident took place at around 12 midnight when Mugove and his two colleagues were caught after breaking in at house number #HJ13 in Nyandoro Street, while attempting to steal a television set. People only managed to catch Mugove but others who accompanied him managed to escape”.

“People were enraged after they identified Mugove, a person who they knew was responsible for raping and killing a minor in the same community, and started assaulting him throughout the morning. Mugove passed away at around 7 am while he was in police custody”, said the source who spoke on condition of anonymity”.

In 2013, Mugove was accused of raping and murdering a 10 year old girl before dumping her in a maize field, an incident which sparked a national outcry as people and pressure groups demanded for justice to be served.

Sources told State of the Nation that Mugove was arrested during that time, but the circumstances of how he came out of prison are not clear,  as some said he was released on bail, while others said he came out  through the previous presidential amnesty.

Efforts to get a comment from Police Spokesperson Assistant Commissioner Paul Nyathi were fruitless as his phone was not being answered by the time of publishing. But State of the Nation has it on good authority that the case was reported at Rugare Police Station yesterday where he is reported to have lost his life.