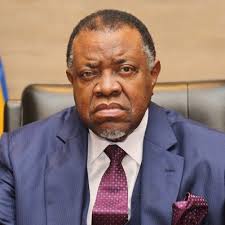 German troops killed tens of thousands of Herero and Nama people between 1904 to 1908 in response to an anti-colonial uprising.

It is thought that 75% of the Herero population and half of the Nama population died.

The two countries started negotiations over reparations in 2015 and have so far held eight rounds of talks.

President Geingob was on Tuesday briefed about the negotiations by the Namibian negotiating team led by special envoy Zed Ngavirue.

“The current offer for reparations made by the German Government remains an outstanding issue and is not acceptable to the Namibian Government,” the president said in a statement.

No details of the offer was given.

Germany has agreed to apologise in principle but declines to accept the term “reparations”, while Namibia finds the terminology “healing the wounds” inadequate, the statement added.