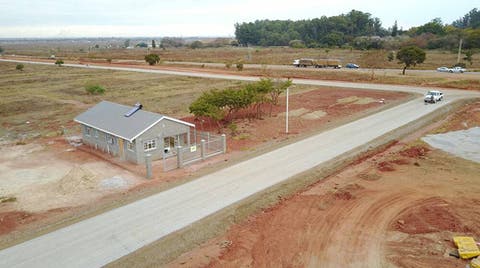 The Minister of State for Harare Metropolitan Province Oliver Chidau is in a nasty fight with Norton Legislator Temba Mliswa over the control of stand 48 Aspindale Park, with both parties accusing each other of using doctored tittle deeds to claim the hotly disputed piece of land.

The hot dispute over the ownership of Lot 48 Aspindale Park between Marimba Residential Properties and five housing co-operatives namely Joshua Nkomo, Leopold Takawira, Wadzanai, Mydek and Dzapasi has sucked in Chidau and Mliswa, with the former fighting in the corner of Marimba Residential Properties while the latter fighting for the housing co-operatives.

Addressing journalists yesterday, Minister Chidau indicated that the disputed piece of land is owned by Marimba Residential Properties and said the housing co-operatives are only creating confusion which is affecting the residents of the area.

Minister Chidau said the ownership of the area by Marimba Residential Properties is backed by a tittle deed to the land in terms of the law and accused the housing co-operatives of parcelling stands on the land they do not own.

“The co-operatives that have roped in Honourable Mliswa have not acquired any sort of tittle to this land and yet are violently asserting their perceived rights to the land and duping the residents of Aspindale Park into buying fraudulent and invalid tittle, for their own financial gain.

“The offer letter purportedly held by the Joshua Nkomo Housing Corporative, this offer letter is a fraudulent. Furthermore, as mentioned above, offer letters are secondary tittle, particularly where there is a clear tittle deed making it clear who the owners are. In this respect, references to an offer letter are being made to cause confusion.

“Honourable Mliswa’s dishonest rants on a range of media platforms have created the false impression that as Government Minister, I have the capacity to grant ownership or tittle to individuals and entities at my discretion. This is false” said Chidau.

He also accused Joshua Nkomo housing co-operative of committing crimes like fraud, malicious damage to property, assault and public violence, crimes that Mliswa is reportedly ignoring when they are affecting the residents that he claims to be representing.

“It is unfortunate that Honourable Mliswa has taken it upon himself to peddle falsehoods and make frivolous allegations of corruption against me, despite the availability of a plethora of documentation that makes the facts quite clear.

“Honourable Mliswa’s involvement, along with a range of other political actors in this matter is purely to fulfil their own political agendas and ambitions. After losing several court proceedings related to the property in question, the co-operatives somehow recruited Honourable Mliswa to sanitise their illegal activities by causing confusion.

“These are individuals who are also fearful of the prospect of reimbursing innocent residents to whom they fraudulently sold land,” he said.

But Mliswa today accused Marimba Residential Properties, reportedly owned by Businessman Billy Rautenbach of using a doctored tittle deed to claim the land which does not belong to the company, and lambasted Minister Chidau for standing with the latter instead of representing more than 30 000 people living in the area.

“Billy has no tittle to the land. The tittle deed he has is fraudulent. Billy has never owned that piece of land as it was always owned by Rothmans International.

“The deed of transfer is here, ownership is about the deed of transfer, ownership is not about you talking to Oliver Chidau or July Moyo and corrupting a few people in the registry and deeds office to manipulate papers so that a white man who never owned the land becomes the owner. He is a criminal land baron who fraudulently came up with deeds” said Mliswa.

Mliswa said the housing co-operatives that are developing the piece of land were given a green light by the government and accused Rautenbach’s company, Marimba Residential Properties of being fake and non-existent before presenting a document to the media showing that the company is not registered with the central company registry.

“Chidau’s conference was to endorse this corruption because he intends to benefit from the set figure of US$720 per month that residents were asked to pay. How can the government which claims to be rolling out a program of affordable housing be charging such a figure? They also want to put pressure to the government so that it can compensate Billy and give him another piece of land. That is the other motive behind their pressure,” said Mliswa.

Meanwhile, Harare Provincial Development Coordinator Tafadzwa Muguti yesterday said government is moving in to de-register all housing cooperatives which he accused of fleecing people of their money through parcelling out state land.

“There is no room anymore for the so called housing cooperatives which are fleecing people of their money. The general public must stop dealing with individuals for acquiring State land, local authority land and privately owned land,” he said.