ECOZI, CBM launch the “Leave no child behind” report 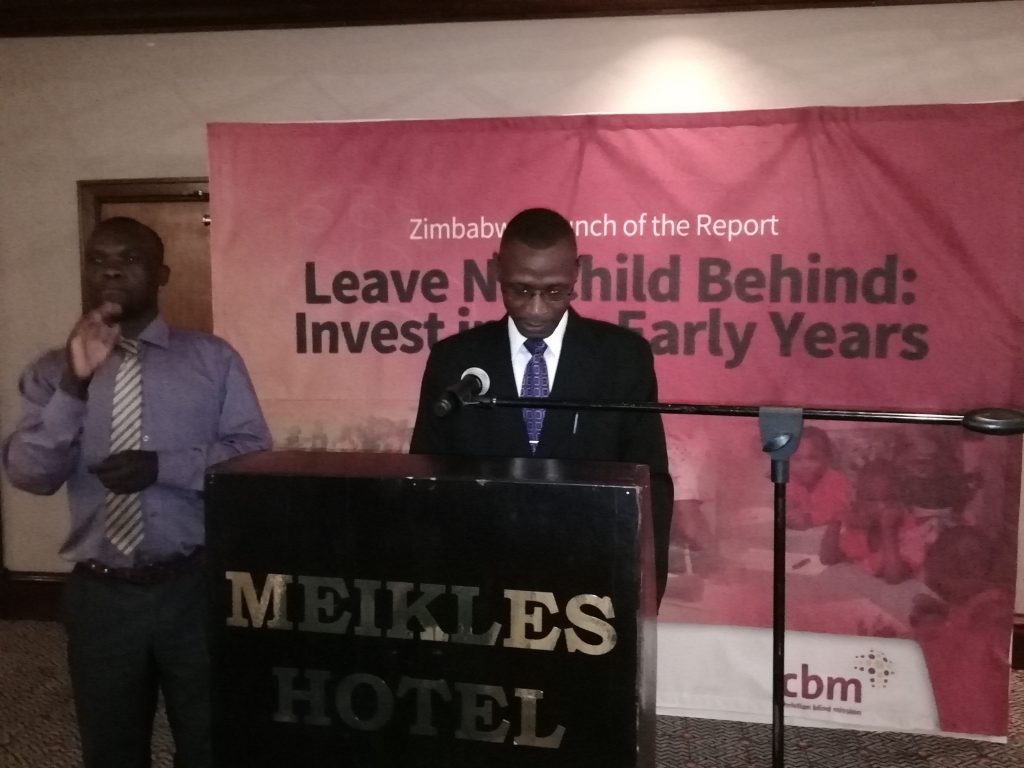 The Education Coalition of Zimbabwe (ECOZI) and the Christian Blind Mission (CBM) have jointly launched the Leave No Child Behind (LNCB) report which analyses Zimbabwe’s Early Childhood Development context, detailing what donors are doing to support the government while identifying gaps and priority areas which the ministry needs to consider in future planning to provide the best facilities for ECD learning.

The research was funded by Light to the World and Open Society Foundations. Speaking at the launch, ECOZI and ZINECDA Director Naison Bhunu said the report reveals that there is limited funding in to early years from Overseas Development Assistance (ODA) as most funding is going to health and nutrition. He also noted that funding is likely going to decrease due to COVID19, which has seen most financial resources being directed towards managing and containing the pandemic.

“Globally, the two lead funding support for early years are World Bank and UNICEF, but however in Zimbabwe, their contribution is very marginal. It has been regrettably noted that ODA contribution continues to diminish as in 2015 the two largest bilateral donors, US and UK, decreased their aid to basic education respectively by 11% and 9%. In Zimbabwe, donor support, though minimal to less than 10%, has a significant influence over shape of the national education plans and oversight.

“Funding to ECD by Government was visible from 2015 to 2018 backed by policy reform of 2014, however since then, policy fallout and budgetary shrinkage has been observed starting with the statement by Minister of Finance and Economic Development who indicated funding for teachers’ salaries for those who were to be employed in schools for ECD to be paid by parents and local communities. Ministry of Primary and Secondary Education, which had established a directorate for Infants Module (ECD) removed the directorate together with ECD Trainers at district level and was appended to Primary section, diluting policy influence it enjoyed at higher levels. It is my heartfelt submission that the higher authorities in the Ministry will reconsider this position as this level consist of 32% of school population.

“This report, and gathering, hopefully will persuade all funding stakeholders to contribute significantly to Early Learning in Zimbabwe where no child is left behind. As civil society we promise to fulfil our role,” said Bhunu.

“I am so proud of every single partner who is here who has dedicated their lives to making sure those children get a good start in life. Let us not forget children in emergencies, children with disabilities and children at risk of violence and abuse. Your hard work demonstrates that you understand the value of good education and hence let us work together to promote Inclusive Early Childhood Development,” she said.

The launch was attended by the Director of Human Resources in the Ministry of Primary and Secondary Education Learnson Tagara who came on behalf of the Permanent Secretary Mrs Tumisang Thabela. In his address, he said the report calls for increased funding in the ECD sector, and gave assurances that the Ministry remains committed to provide support through policies and programs.

“This report that we are launching today mainly calls for increased funding for the ECD sector. The Ministry commits to ensure continued support of ECD through drafting and implementing of progressive and inclusive policies, spearheading development programs that support ECD. We are cognisant of the fact that, investing in children’s early years is one of the smartest investments we and donors can make to break the cycle of poverty, address inequality in Zimbabwe.

“I would like to thank the Education Partners, specially mentioning Light to the World, the Open Society Foundations, Christian Blind Mission and the Education Coalition of Zimbabwe for this timely report,” said Tagara.